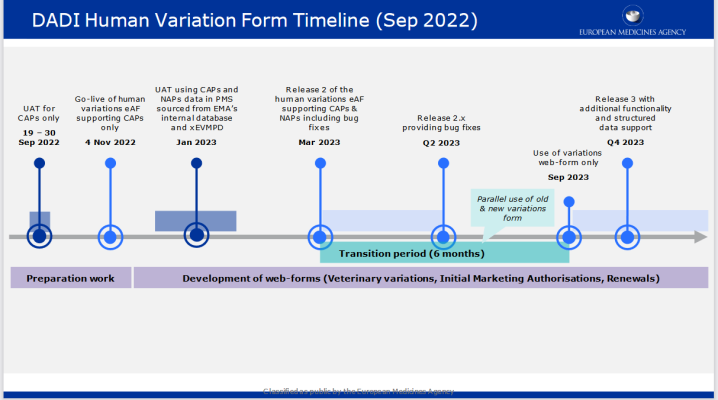 The web-based Human Variations electronic application form (eAF) for centrally authorised products (CAPs) is available for use since November 4 on the new Product Lifecycle Management (PLM) Portal hosted by EMA.

The UNICOM consortium and in particular AGES, the Austrian Agency as Network Product Owner and AEMPS, the Spanish Agency, as development partner, have been working hard with the entire eAF product team, showing an example of close collaboration between the EMA and participating National Competent Authorities (NCAs) to make this happen. UNICOM has also been instrumental in informing and activating key decision-making actors and both IT and business units within all European National Competent Authorities.

This go-live represents in fact the first major Agile release in the context of EMA’s Product Lifecycle Management Value Stream and an important milestone in the journey towards strengthening how regulators capture and reuse data across the product lifecycle, which will improve data validation and handling, during procedures.

Following the release, users of the Human Variations eAF should expect continual work on improvements in the form of regular releases which may include additional structured data fields. The eAF product team will thus improve and expand on this release in subsequent releases in 2023.

To help users get familiar with the new form and the new environment, a important number of initiatives have been launched. UNICOM has organised two webinars dedicated to enlarging the understanding and use of the FHIR standard for medicinal products and for the variation forms. The videos remain available on the UNICOM YouTube channel. UNICOM is committed to organise complementary sessions to answer specific requests from NCAs.

The EMA eAF product team has also foreseen a number of support events in the immediate future and in the coming months. These activities are targeted both at Industry and the National Competent Authorities.

A formal training session on the Human Variations web-based eAF will be organised on 8 November 2022 (10:00-11:30): Registration link.

In order to make sure that no question is left unanswered and that feedback and suggestions are taken on board, three supplementary Q&A clinics will be organised in November on the following dates:

Additionally, updated guides for portal registration and navigation will be made available via the eSubmission website and the PLM Portal.

The launch of the Human Variations web form will be followed by web forms for variations for veterinary medicinal products, initial marketing authorisations and renewals. As of the November go-live, the web-based form will support variations for CAPs. A subsequent release of the form in March 2023 will support all types of EU Human variation procedures (CAPs and NAPs).

As a reminder: this release will not trigger a transition period towards mandatory use. The formal transition period is targeted to start after the anticipated March 2023 release, when nationally authorised products (NAPs) features will be also added to the form, and end six months later . The interactive PDF eAF will remain available until the end of the transition period.

The new PLM Portal will in due course host all eAF forms, data input user interface for product management service (PMS) data and the interface to provide data for electronic Product Information (ePI). In the coming weeks, the name DADI will be phased out in favour of “eAF” and “PLM Portal”.

The DADI project working on the eAF has been an essential brick leading to a wide and global implementation of the ISO-IDMP standard. Creating interoperability at the source for medicinal products, beyond immediate functional results, will bring far-reaching changes in the global health ecosystem with the promise to create bridges between all the actors and use cases associated with medicinal products and to make a major contribution to patient safety, efficient research, personalised medicine, decision-support and overall administrative simplification.

The UNICOM Innovation Action has received funding from the European Union’s Horizon 2020 research and innovation programme under grant agreement No. 875299.

Manage Cookie Consent
To provide the best experiences, we use technologies like cookies to store and/or access device information. Consenting to these technologies will allow us to process data such as browsing behavior or unique IDs on this site. Not consenting or withdrawing consent, may adversely affect certain features and functions.
Manage options Manage services Manage vendors Read more about these purposes
View preferences
{title} {title} {title}